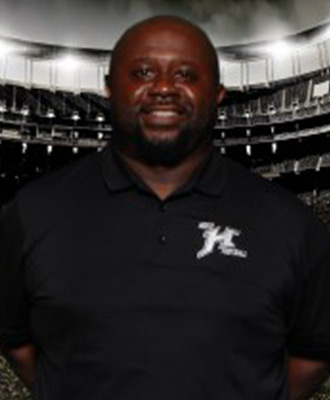 Coach Johnson is entering his 5th season with the Bears, and his 12th season coaching football and basketball. Coach Johnson will server his 1st season as Head 9th grade football coach and 4th year as Head coach for the Girl’s Basketball team. Before HoCo, Coach Johnson was a defensive back coach and Head Boy’s basketball coach in Dodge County, Eastman Ga.
Coach Johnson earned his Masters of Education from Jones International University in 2013, and his Bachelors of General Studies from Brewton parker College in 2001, where he played basketball. Daniell is married to Kristy Johnson and they have two kids Jordyn Johnson and Nakhorri Harrel.